The Shockingly Affordable Home This Couple Risked Buying—Should You Get One, Too? 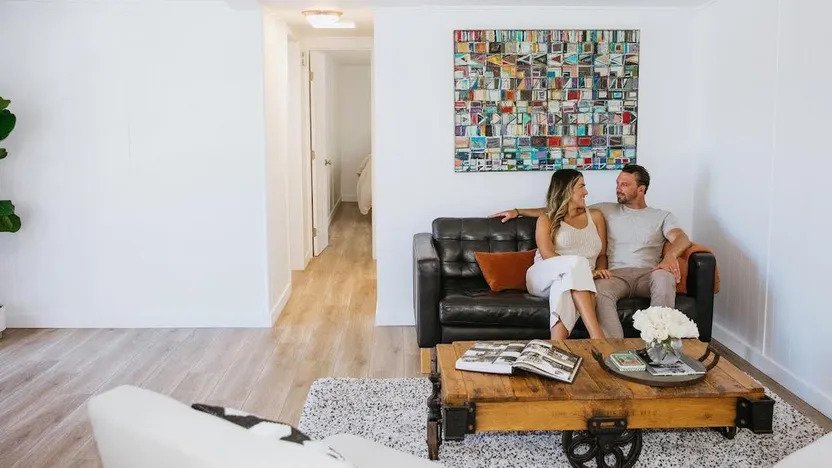 The Shockingly Affordable Home This Couple Risked Buying—Should You Get One, Too?

Joey and Sydney Leisz were losing hope of ever becoming homeowners.

“Being in our late 20s, even though we both have great careers working in real estate and my wife as a college professor, we were having a difficult time getting our foot in the door with a home purchase,” Joey says.

They were living in south Orange County, CA, one of the nation’s most expensive markets where “entry-level homes … can be between $800,000 to $1 million,” according to Joey.

They were resigned to being lifelong renters—but shortly after they tied the knot two years ago, Joey received an intriguing offer: A client of his was looking to unload a mobile home for $65,000.

The price was certainly appealing, but Joey had never considered living in a mobile home.

“There is a bit of a stigma,” Joey acknowledges. Plus, this mobile home, built in 1963, was in rough shape.

“But my wife and I don’t really care,” Joey says. “We were young, and we were just trying to get our foot in the door for a place we weren’t renting.”

They decided to move ahead with the purchase, moving in with relatives for several months while pouring about $40,000 into fixing the place up.

Three years later, they’re still there and loving it.

“A lot of people think manufactured homes aren’t as durable, not as glamorous,” he says. But for them, it was a great option.

“We’re very grateful to be in a position where we didn’t have to pay an arm and a leg, and got a chance to build some sweat equity.”

While the majority of America’s homes are built on site from the ground up, a far more budget-friendly option exists that’s growing in popularity: manufactured homes, which are built in factories, then assembled on site.

Many might think of manufactured homes as mobile homes, yet these two terms do not mean the same thing. While mobile homes are also built in a factory, this term refers specifically to homes built before 1976 with wheels that could be pulled by a vehicle. (This is why they’re also known as “trailers” and must be licensed by a state Department of Motor Vehicles.)

Manufactured homes are built in a factory from 1976 onward, after new federal regulations governing their construction came into force to make them stronger and safer structurally. Manufactured homes also rest on a permanent, nonremovable steel chassis.

Some 22 million Americans live in manufactured homes, according to 2022 data from the Manufactured Housing Institute. Those residences cost a mere $108,100 on average—about one-quarter of the national median cost of existing single-family, site-built homes in November, of $416,000.

While manufactured homes are often stigmatized as being “cheap” or flimsy, regulations have greatly improved the construction of these residences over the years. A recent study by the Institute for Building Technology and Safety found manufactured homes built from 1994 onward to be as safe as their site-built counterparts during tornadoes and hurricanes.

And due to their low price tag, many real estate experts see manufactured homes as “absolutely” a solution for America’s housing crisis, says Karan Kaul, a researcher with the Urban Institute who’s studied them extensively over the years. In fact, Kaul and a colleague wrote in 2022, “Quality improvements in construction and installation practices have increased durability so that the life expectancy of factory-built housing is increasingly comparable with that of site-built housing.”

The challenges of manufactured/mobile homes

Yet, despite the major savings manufactured homes offer, these residences aren’t without their unique challenges. For starters, local governments often impose zoning restrictions that make it difficult to find a viable location where a manufactured home can be placed.

Many are relegated to very specific areas, many of which defy the run-down “trailer park” stereotype and can be downright posh. For instance, in Paradise Cove, located along the ocean in Malibu, CA, manufactured homes regularly sell for over $1 million.

Owners of manufactured homes also typically rent the land on which their home is situated. While this can leave homeowners vulnerable to rising rent, the Leiszes were lucky to live in a park that offered some protection from spiraling costs.

“We live in a park that is run by a not-for-profit, so there are stipulations as to how much they can increase the space rent per year,” Joey explains. “We currently pay about $950 per month for our park’s space.” Plus, their annual rental increase is capped at 3%.

Another big hurdle for some would-be buyers is financing. Borrowers who don’t own the land on which the home sits won’t qualify for a traditional mortgage. The alternative, what’s called “chattel” financing, can be significantly more expensive at more than double the interest rate of a traditional home loan.

The circumvent this hurdle, the Leiszes paid $65,000 in cash for their fixer-upper.

In terms of renovations, there were some limitations. Unlike in site-built homes, there’s no way to move walls or do other major renovations. So the couple invested in flooring, paint, millwork, and trim.

And when it comes time to move on from their starter home, Joey isn’t worried about being able to sell for a profit. Manufactured homes appreciate at rates comparable with site-built properties. A 2018 Urban Institute analysis found that between 1996 and 2018, manufactured homes rose an average of 3.4% per year, just below the 3.8% annual price gain for traditional homes for the same period.

Something big is happening in the U.S. housing market—here’s where 27 leading research firms think it’ll take home prices in 2023

Something big is happening in the U.S. housing market—here’s where 27 leading research firms think it’ll take home prices in 2023 Do you like this Article ?  Sign up HERE for your FREE M&M Account to receive more Real Estate related information and news and THIS...

The issue for California residential real estate remains the same. Poor affordability means that despite latent demand, buyers can’t afford the prices of homes in the Golden State. For that reason, many have left to find much cheaper homes in other states. Unemployment will likely be on the rise along with lower business profitability (tech sector continues to lay off workers) which means fewer buyers are likely for 3 to 6 months.

The stronger consumer optimism is running against sticky inflation and a likelihood the FED can’t lower interest rates. But will that discourage buyers in California? Demand is always intense in CA. No other place offers what California has, and buyers today do seem to put lifestyle at the top of their list.

5 Trends That Will Shape Luxury Real Estate in 2023

The luxury housing market, like most other real estate sectors, is adjusting to a slowdown. Affordability and home size are every bit as much on wealthy buyers’ minds as other consumers. “The reality is we are coming out of one of the best real estate markets in history,” Gary Gold, a luxury property specialist with Coldwell Banker Realty in Beverly Hills, Calif., notes in the latest Coldwell Banker Global Luxury Trends Report. “But that level of demand and price appreciation wasn’t sustainable.”

Nearly 90% of respondents to the Coldwell Banker survey say they believe the real estate market will be better than or the same as 2022 for property investment. The following emerging trends were noted in the report.

Real Estate Talk with Coach DP3 a day ago

Social Media & Marketing Tips and Nuggets a day ago