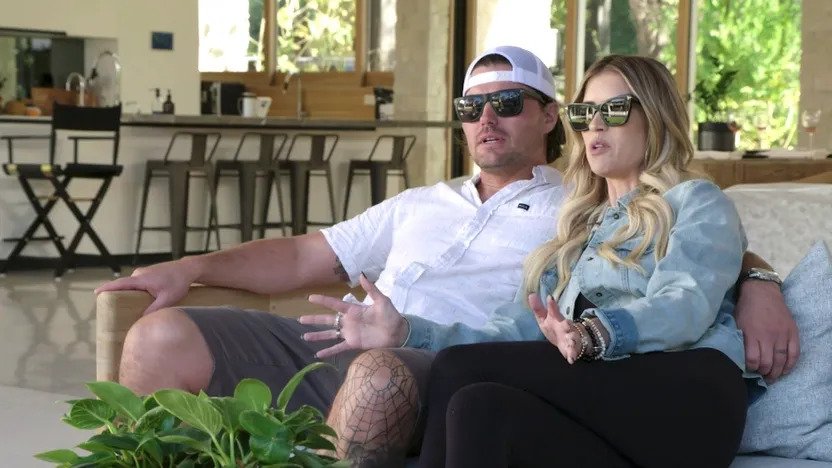 Christina Hall may have flipped and designed hundreds of homes, but even she still makes some surprisingly basic mistakes when it comes to her own personal real estate decisions.

Want proof? On the latest “Christina on the Coast,” she gives fans an up-close-and-uncomfortable view of her latest move from her recently purchased house in Dana Point, CA, to a newly purchased mansion in Newport, CA. And it’s not pretty.

At the same time, the episode “Big Family, Tiny Kitchen” also highlights Hall’s renovation for clients Ruby and Berto, who have a budget of $100,000 to turn their cramped kitchen into a prime entertaining spot.

As Hall juggles both work and home life transitions, she does somehow pull it all off and dish out some excellent tips for moving and redesigning. She is proof that if at first you don’t succeed, try, try again! Here are some lessons we learned from her this week.

At the beginning of Season 5 of “Christina on the Coast,” she, her three children, and her new husband, Joshua Hall, finally settled into their Dana Point house, which had a remarkable ocean view.

But they were not happy with it. In every episode, Christina complained that as beautiful as the views were, she was enduring a ridiculous hour-long-each-way commute to the kids’ schools, friends’ houses, and athletic practices.

So less than a year after moving in, Christina sold her Dana Point house for $11.5 million and plunked down $12 million for a 7,000-square-foot modern mansion back in Newport.

The purchase apparently set a record for a nonview property in Orange County. Did Christina overpay? Perhaps. But the convenience of being close to her children’s school and other obligations sounds like it was worth every penny.

For furniture, go with what’s in stock

Christina sold her Dana Point home fully furnished, which could have contributed to the $1.2 million profit she made on it.

But that meant they wouldn’t have any furniture to take to their Newport Beach house.

“Everything I’ve tried to order is on back order,” she complains.

So when she and Josh go furniture shopping, they’re taking no chances.

“We sold our last house fully furnished, we have nothing, so we need everything,” she tells the upscale-furniture store owners. “Everything that I’ve tried to order is on back order.”

So she reveals her new strategy: “We’re going to make a list, and then we’ll talk to you about what’s available, what’s in stock,” she says.

Because of delivery and supply issues these days, it’s a good idea to see what’s available before you fall in love with any particular pieces—especially if you don’t have anything to use in the meantime.

As Christina gets to work on a new kitchen for Ruby and Berto, she suggests opening the kitchen window to the backyard, so the family will have a pass-through for food and drinks.

She gives the couple two options: “The first is, the window will open up like a garage, so the whole area would be a pass-through. However, that isn’t cheap.” The window unit itself is pricey, and opening up the wall will be even pricier. This option will cost about $6,000.

The other option is to go with the opening already in place and have half of it slide open as a pass-through.

At first, the couple go for the $900 option, thinking $6,000 is just too much for one window. But then they decide they want the extra light and splurge for it. Their decision turns out to be a good one, where the larger window totally merges the kitchen with the backyard.

Simple flooring is better in a big space

Christina shows Ruby and Berto a couple of flooring options for their kitchen, dining, and family room space. Both are wood-look luxury vinyl.

“This one is a little bit lighter, a little more simple,” she says pointing to the plainer sample.

“I think a lot of that over a large space might be a little overwhelming,” says Ruby.

“Too knotty,” Christina agrees, adding that a lot of detail in a large space can look far too busy.

Knobs are out, handles are in

When deciding on drawer and cabinet pulls for the bar in the dining area, Christina gives the couple a choice between knobs and handles. They’ve already selected all handles for the kitchen.

“I’ve never really been a big fan of knobs,” says Ruby, and Christina agrees that the handles look much more elegant.

“Brass pulls add a little bit more of the glam factor,” she says.

By the end of the episode, it’s clear Ruby and Berto are thrilled with their new kitchen.

“So you guys have this amazing backyard where you already do your entertaining, but now, we can actually tie the inside with the outside,” says Christina.

“It’s totally transformed! It doesn’t even feel like the same house,” says Berto. “I can’t wait to get the margarita machine going and start passing those back and forth. Our house is now a freaking resort— I’m going to start charging admission!”

And as for Christina?

By the episode’s end, it looks like Christina’s family will get their furniture delivered to their new home within a few days, so they don’t mind roughing it a little bit longer with picnic dinners on the floor. This discomfort is balanced out—at least somewhat—by the fact that they’re now living much closer to their school and friends. Here’s to hoping Christina has finally learned the importance of location, location, location.

Should I Wait For Housing To Crash Further Before I Buy A House? 3 Reasons The End of 2022 Could Be The Very Best Time To Jump In

In two-thirds of major regional housing markets — 98 out of 148 — prices continue to drop, especially in more expensive locations.

We may see expensive markets fall further, which if that happens sooner than later, would make it an excellent time to buy into an expensive market. This wouldn’t have registered as a possibility even a few months back.

It’s difficult to predict if this will happen. And if so, whether falling prices become offset by the federal interest rate hikes practically certain to arrive in the coming months.

The only way to know for sure is to wait until the latest rate hike sets in.

Meanwhile, keep in mind that — as with any investment — it’s best time to buy is usually when prices are low.

With mortgage rates dropping and fee changes in the pipeline, now may be the time to buy that home

With mortgage rates dropping and fee changes in the pipeline, now may be the time to buy that home Do you like this Article ?  Sign up HERE for your FREE M&M Account to receive more Real Estate related information and news and THIS article. M&M Membership...

‘Deals to be had:’ Homebuyers Should Ask For These Incentives While They Have The Upper Hand

The days of waiving contingencies such as appraisals and forgoing inspections are fading into the rearview mirror. Still, contract activity remains slightly competitive depending on your location.

Home inspection contingencies are particularly important because it can let you know if there’s a deal-breaking issue with the property before a purchase occurs. It can also help you negotiate repairs with the seller, which is becoming increasingly common in today’s market.

“If buyers have this short window to buy where they can get incentives to purchase, [they] would rather buy where they have an opportunity to really think about it, get an inspection, a financing contingency and not feel rushed,” Jeff Reynolds, broker at Compass and founder of UrbanCondoSpaces.com, told Yahoo Finance.

Investing in Alternative Assets for Retirement 21 minutes ago

Investing in Alternative Assets for Retirement 26 minutes ago